What is Missing on the Current Toon Squad? 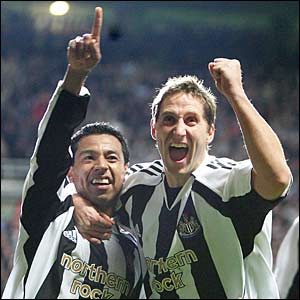 Ok, everyone must be agree on the fact that we have more improved squad team this season. We have a much-much better improvement in our defensive role. Our midfield are packed of quality players, who capable enough to destroy any other Premiership team squad on the same position.

In front we have world class strikers in Mark Viduka, Oba Martins and Michael Owen. But, the question is why this team can lost in a game against other team that is ‘half quality’ than what we have now?

The answer is, imho, we don’t have the same quality of Shearer’s leaderships on the team. We don’t have any other player recently who can command the field during the match, a player who can give motivations and a good sample of how to handle the situation, especially when we are in goal behind.

I remember last couple of seasons ago, we are the famous team who is chasing the game after conceded first and then win the game. The good example is when we play Leeds United at Elland Road back in December 2001, when we were 3-1 down by the 56th minute. I don’t expect we can win that game, but the Lads have turn the table and fought back to make it a famous 4-3.

I can win a brand new car If I dare to take my friend’s challenge on that day when he said Newcastle is already lost and will never get back in a game by any chance.

Now after Shearer’s retirement, we are struggling to get back in a game. Geremi, although he may have the more experience than other players, but he is not good enough as the leader, and not given enough motivation to win the game, most of all when we playing away game.

Most of other media is talking about getting new players to strengthen the squad, buying new players in January probably good, to replaced the money-wasted players we have right now.

But, I really want to see the new Alan Shearer, the new leader in our team. Big Sam should looking for the new general, a commander, his deputy on the field who can transfers his tactical intructions and the player who can burn the spirits of his team mates.

Then, we are a complete team who is ready to face any challenge. Howay the Lads!!!

Habib Beye: ‘We Should Have Kept the 1-1 Scoreline’