Michael Owen is putting the first real test to Sam Allardyce’s “Scientific Football” at Newcastle after the prime England and Newcastle striker has picking up a thigh injury in training today.

The 27-year-old picked up a minor injury in shooting practice and will be out of Saturday’s pre-season friendly at Carlisle and the Celtic’s match.

Sam Allardyce does not expect the England international to be out of action for any more than 10 days, but I think he will now something to do with his scientific approach to avoid more injury hit lists to his squad even before the kick-off of the real competition.

Sam said: “It’s a slight thigh injury he picked up doing a little shooting exercise, so we are taking a precautionary measure and leaving him out of Saturday’s game.”

“It may actually be a little early for the Celtic match, but Juventus on the next Sunday is one we hope he can be fit for.” I do hope so! Meanwhile, another long-term injury casualties, Celestine Babayaro will have a meeting with top specialist Dr Ulrike Mushaweck, to have his groin and hernia problems examined.

Frau Mushaweck also got both Alan Shearer and Steve Harper back on their feet in the last two seasons, but even if she has the same success with Babayaro, the Nigerian international still looks set to miss the start of the season, leaving Big Sam without a recognised left-back.

To solve the problem, it’s being reported (or speculated) today that Sam is already make £7m bid to a mysterious top-class defender. The Official site refused to disclose who the target is but it is likely to be a central defender or left back or Fabio Cannavaro? 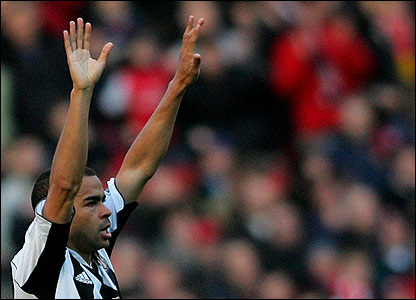 More interesting and audacious speculation coming from the Chronicle yesterday about West Ham are more than keen in signing Kieron Dyer to join his former colleague Craig Bellamy, Scott Parker and Lee Bowyer at Upton Park.

The Hammers are step up their interest after their £6.1m brand new ex-Bordeaux midfielder Julien Faubert has ruptured his Achilles tendon, which means he will be out for six months. Dyer later commented about this news as saying that he is not interested about it and will keep his job at Newcastle. Well done Lad!

We Are Not Testing the Water or Anything Else 0

First Blog, Things to Get Mad About 0