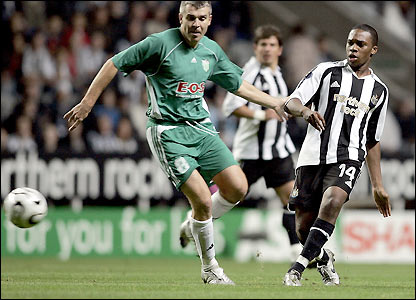 The 21-year-old Frenchman was linked with a move to Arsenal during the transfer window, but has now pledged his future to Sam Allardyce’s side.

N’Zogbia was in newspapers at the start of this summer as he’s been opted to leave Newcastle United because he is unhappy at the Magpies nest. But now, he has scored two magnificent goals in Premier League and was enjoying his new role as a left back.

Charles was brought to Newcastle in 2004 as a teenager from his old club Le Havre. Since then he has numerous of games for Newcastle united reserves team before finally called up to the senior squad.

Today, he has signed a new contrat with Newcastle that will keep him at Fortress St. James’ Park for the next five-year.

“I am happy to sign my contract and I see my future with Newcastle because it is a great club,” said N’Zogbia.

Harper getting Sharper this season 0