Obafemi Martins officially announced how sorry he is for his misses against Arsenal on last Tuesday Newcastle’s Carling Cup exit. He feels embarrased for three chances he has but failed to finish them all. 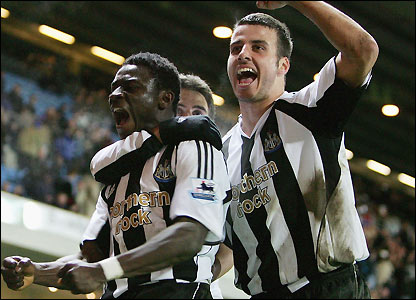 On the day where Newcastle United has to play for the second time in just one day off in between, Martins revealed that he has made the Toon Army disappointed.

“I feel really, really sorry for our fans. It was disappointing for all of us, but especially me after having some good chances.”

He also knows that the task to get goals for Newcastle is now rely upon his shoulders. Michael Owen and Ameobi both still battling for fitness, while Mark Viduka is set to play again after being rested last Tuesday’.”As a striker I have to accept it wasn’t my day, it was hard luck.

After the game I thought ’Oh my god’ but I have to recover.” Martins added more about his chances at Emirates.”It’s over now, so I have to focus on the next game against Manchester City.”

For tomorrow’ game, Martins will be looking to renew his partnership with Mark Viduka at the City at Manchester Stadium.

Newcastle held in a goalles draw at Loftus Road 0

Verdict from the Emirates, strange Newcastle team got beaten again 1

There’s No Top Four for Toon 0