For the very first time, I am Really Disappointed!

Not just that Newcastle United is (once again) lost in a game, but most of all, the Lads looks like not in the mood to hang-on to Martins goal and go back to North-East with three points. 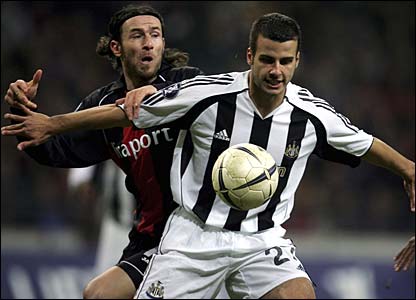 After watching Oba Martins proved what he said yesterday about how sorry he is to not scoring against Arsenal on Carling Cup, with a great taken goal in 29 minutes, the game suddenly turns into “Get Back All of You, and Defend” style.

I feel that what have been the best part of the Newcastle United team so far, today have been trash out by Manchester City. The back four looks crap and not well organized like many games before.

Especially to note that Steven Taylor really have bad performance today, and he or his father should think again of what they have done to the club by singing into the press about his new contract.

The first half, although we have conceded one “should have not been” City equalizer we did play quite well, but in the second half, after the quick City’s second goal, we are utterly useless. The Lads looks like don’t know what to do and playing without any game plan.

Maybe Mark Viduka should have not been played today, because of his foot injury and also Taylor. I Imagine what it would be if we have Faye and Smith on their place.

Newcastle United vs Fulham FC, Viduka Give 1-0 Lead at Half Time