What is Actim Index? Actim Index was being calculated by several factors of the game that any player get involve in. The Index is the official player rating system of the English Premier League and Coca-Cola Championship. 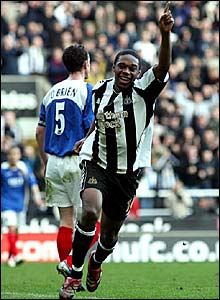 Introduced for the 2004/05 season and was devised by statisticians at the University of Salford in partnership with PA Sport. In the 2006/07 season, the Index was enhanced by the addition of assists and clean sheets to the factors that are taken into account.

Actim Index resulting from Actim Stats, a collection of team, player and match statistics. The stats derived from all the actions that take place during a match, including goals, shots on target, corners, fouls, offsides, passes, tackles, blocks and clearances.

From each game played, the data is gathered by two methods – real-time match analysis and video footage.

The real-time analysis is conducted by ex-professional footballers that report on action at the grounds as it happens. Further, more detailed analysis is obtained by studying videos of the matches.

Based on that, every players from the English Premier League and Coca-Cola Championship, have their own scores and getting into the Index table. Newcastle United Charles N’Zogbia was the only player who was in the Top Ten Premier League Players Index.

Visit the Actim Index website for the complete details and other Index tables.